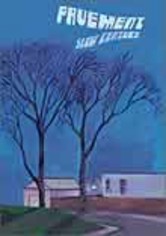 2002 NR 2 discs
Fans of Pavement will love this ultimate retrospective, which contains all 13 of the group's music videos; alternate videos of "Rattled by the Rush," "Major Leagues" and "Cut Your Hair"; and some hidden treats. Performance footage from two 1999 concerts -- one at Seattle's Showbox and the other at Manchester, England's Brixton Academy -- is also included, along with director Lance Bangs' hourlong documentary chronicling the band's 10-year career.