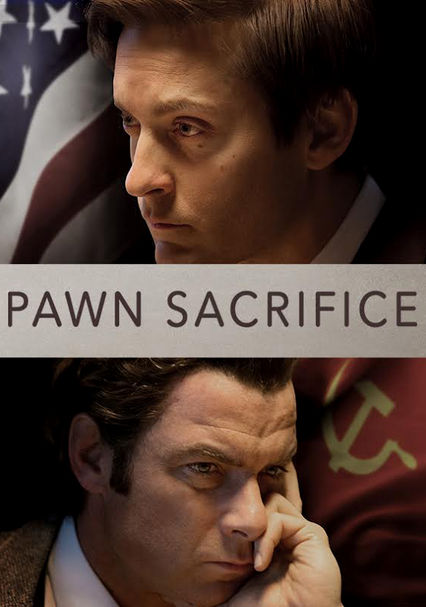 2015 PG-13 1h 54m Blu-ray / DVD
Set during the height of the Cold War, this compelling biopic charts the tumultuous life of chess wunderkind Bobby Fischer, from his formative years to his epic world championship match against Soviet archrival Boris Spassky in Reykjavik, Iceland.

Parents need to know that Pawn Sacrifice is a biopic about famous chess player Bobby Fischer (Tobey Maguire), set mostly during his famous 1972 world championship match against Russia's Boris Spassky. While chess is crucial to the story, the film really focuses on Fischer -- particularly on his tenuous mental condition, featuring several incidents that seem to tip toward madness. Expect plenty smoking (accurate for the era) and some drinking, as well as occasional swearing (including "s--t" and one "f--k") and a few brief suggestions of sexuality. Teens, especially if they're interested in chess, may appreciate it.

A character talks about wanting to lose his virginity and is later seen in bed, undressed, with a prostitute. No graphic nudity.

A crazed character destroys the furniture in a room, convinced there's a hidden listening device.

Infrequent profanity; mostly "screw" and "damn," with the occasional "s--t" and one choice "f--k," delivered by an angry teenager to his mother.

Having raw talent will only take you so far -- to really excel, you also need to have the focus and drive to perform at your best. Not everyone has tthat, and the result is that sometimes people squander precious gifts.

Many characters smoke cigarettes (accurate for the era). Characters also drink wine and hard liquor at parties or while relaxing at home.