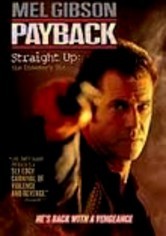 2006 UR 1h 30m Blu-ray / DVD
Payback is bad guy Porter's (Mel Gibson) MO after his wife (Deborah Kara Unger) and partner (Gregg Henry) steal his heist money and leave him for dead -- or so they think. Director Brian Helgeland was cut from the project upon negative reactions to his dark, violent action thriller. Seven years later, he was allowed to re-edit and re-score the film for this gritty director's cut with a different ending.