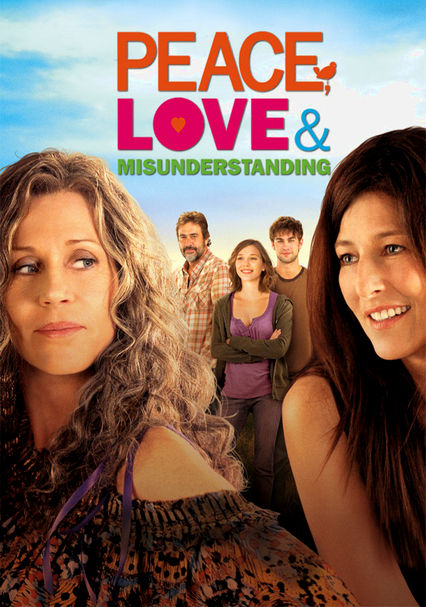 2011 R 1h 36m Blu-ray / DVD
Distraught over her impending divorce, conservative lawyer Diane seeks refuge with her mother, Grace, even though the two haven't spoken in years. Diane's children are thrilled with their free-spirited grandma, while Diane finds peace and romance.

Parents need to know that that Peace, Love, and Misunderstanding is an indie dramedy about clashing values between a straightlaced New York lawyer (Catherine Keener) and her aging-hippie mother (Jane Fonda). The movie finds laughs in their conflict and seeks heart in their attempts to find common ground. There's occasional swearing (including "s--t"), some flirting and kissing, a few quick shots of nude men from behind, drinking, and smoking. But the biggest issue for most parents is likely to be the movie's drug use; almost everyone smokes pot, even the high school student. The movie makes light of Fonda's character's dope habit, even when she's arrested for dealing, in an effort to contrast her free-spirited lifestyle with that of her regimented daughter.

Some flirting and kissing, and two quick shots of naked men seen from behind (while skinny-dipping and posing for a painting). One couple has sex off screen, which becomes an important topic of conversation in later scenes. An aging hippie happily recounts her past sexual exploits, while her adult daughter is less pleased with her mother's endorsement of "free love."

Two characters hit a deer while driving at night and are forced to shoot the injured animal to put it out of its misery. Some arguing.

It's important to be yourself and to understand who you are and what you believe in. But it's just as important to realize that other people are entitled to be who they are and that even though you may disagree with some of their beliefs, their opinions are just as valid as yours. If you approach others with an open mind, you might just learn something important, even from people you disagree with.

The film has a strong anti-consumer message.

Just about everyone smokes pot, including teens. There are joints, roaches, pipes, bongs, and a giant hookah. One of the main characters makes her living selling pot and proudly shows off her high-tech growing operation. Some characters also drink beer or wine at parties or with meals; several smoke cigarettes. In one scene, a group of women gets smashed on tequila shots.