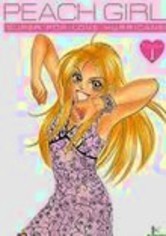 2005 NR 6 discs
Momo, the new girl at school, is having trouble fitting in. A star on the swim team, she's seen by most as an airheaded beach bunny. Her so-called friend Sae is spreading rumors and trying to steal Momo's boyfriend. And then there's Kiley, the playboy Momo saved from drowning, who won't give up his infatuation.