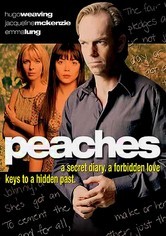 2004 NR 1h 49m DVD
Armed only with her mother's diary, an 18-year-old orphan named Steph (Emma Lung) sets out to uncover the secrets of her past, a search that sweeps her into the arms of a much older man (Hugo Weaving). Jacqueline McKenzie co-stars in this lush coming-of-age drama that was filmed in the heart of the Australian countryside and helmed by American Film Institute-honored director Craig Monahan (The Interview).