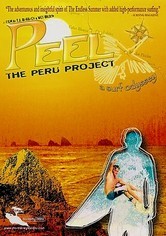 2006 NR 1h 15m DVD
His grandfather, Bruce Brown, made Endless Summer; his father, Dana Brown, made Step into Liquid. Now, Wes Brown follows in the family tradition with his own surf film, heading to Peru to catch the swell. Filmed on location in a land where surfers are recognized as national heroes, Peel: The Peru Project features top wave riders Mark Healey, Jesse Colombo, Jamie Sterling, Sofia Mulanovich and more on a South American surf odyssey.