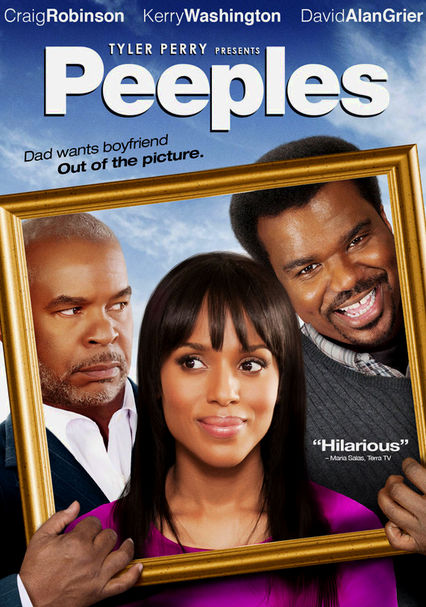 Parents need to know that Peeples is a Tyler Perry-produced, Meet the Parents-esque comedy that follows the misadventures of a man who's finally meeting his girlfriend's family. He doesn't make a very good first impression on her domineering father, almost everyone is hiding something, and eventually things start to unravel in a spectacular fashion. Expect several sexual conversations/references, discussion of a same-sex relationship, lots of skimpy/cleavage-baring outfits (as well as a non-graphic skinny dipping scene), some strong language ("s--t," "d--k," and one "f--k"), and a few scenes feature drinking and drugs (pot, mushrooms).

Several sexual references/discussion of making love. Two somewhat risque scenes show people fooling around, clothed. Many characters discuss the relationship between a same-sex couple; other conversations focus on a woman who has had breast implants. There's no nudity, though some scenes feature gratuitous cleavage shots/skimpy outfits, and one scene shows people skinny dipping from a distance/in silhouette. Flirting/propositioning.

Some bickering among family members. A man who's been drugged tries to attack another man with an antique harpoon.

Honesty is always the best policy -- though at first that lesson is hard for the main characters to embrace. Everybody here has secrets that they think should remain secret, but eventually they come to realize that holding the information inside is hurting people, especially themselves, and coming clean will make things better.

Some consumer products are visible during a trip to a grocery store, including Pirate's Booty snacks. A man drinks Stella Artois beer. Characters ride the Hampton Jitney from Manhattan to Sag Harbor.

Characters drink beer at a bar. A recovering alcoholic fondles a bottle of wine and looks sad when it's taken from her. In the absence of drinking, she's taken to using the marijuana and psychedelic mushrooms she grows in her garden.