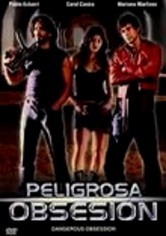 2004 NR 1h 40m DVD
Three strangers with little in common (Carol Castro, Mariano Martinez, Pablo Echarri) join forces in a dangerous obsession with truth, honor and justice in this gripping Argentine drama directed by Raul Rodriguez Peila. When the three learn they're being pursued by a powerful drug trafficking syndicate and police officers on the wrong side of the law, their mission naturally takes a few detours.