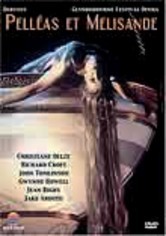 1987 NR 2h 25m DVD
Recorded in studio conditions on the stage of the Opera de Lyon, this production of Debussy's only opera features French singers François Le Roux and Colette Alliot-Lugaz in starring roles. Golaud has returned home to marry the mysterious Mélisande, but she's unhappy and gradually falls in love with Golaud's half-brother, Pelléas. In a rage, Golaud kills Pelléas but immediately regrets his impulse and must bear his suffering all alone.