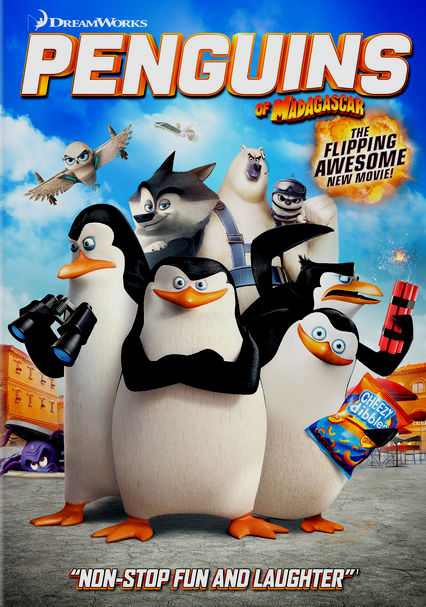 Parents need to know that Penguins of Madagascar is a nonstop action movie/spy thriller about the four madcap penguins from the Madagascar movies. Expect lots of explosions and chase scenes -- by plane, gondola, pest control truck, etc. -- that put the penguins in frequent peril; at one point, the team fears that one of their members has been killed. The penguins are fighting a team of evil octopi that are killed in different ways. There's a bit of crude humor (a penguin is cursed with a "butt hand") and one small, mild romantic subplot, but kids who like action, the Madagascar movies, and the penguins' TV show will enjoy the movie. Plus, there are positive messages about not judging others based on their appearance, as well as loyalty and bravery under pressure.

At one point the penguins think that Private has been killed. Lots of chases/explosions/scenes of peril. The penguins are kidnapped by an evil scientist that turns out to be an evil octopus plotting to kidnap all of the world's penguins. Penguins are put in cages like jails. The penguins fight octopi. A monster penguin eats a baby kitten, then spits it out. The penguins get sucked out of a plane, are trapped on a boat with no food or water, and are turned into monsters.

Pop culture references take the place of swear words (like "Parker Posey!"). "It's flipping useless" in reference to flippers. After the penguins get transformed into monsters, one has a "butt hand" -- a hand coming out of his butt (they explain it in case it wasn't clear).

Don't judge others by their appearance. Private is adorable, but there's much more to him -- Skipper realizes that it's not what you look like but what you do that counts. Other themes include loyalty and bravery under pressure.

The penguins eat brandless cheese poofs. Many off-screen consumer tie-ins, including games, toys, and other merchandise.

One scene where government agents are sitting on what's supposed to be a yacht drinking what looks like champagne.