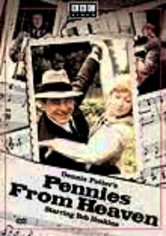 1978 NR 3 discs
One of the most controversial (and lauded) miniseries in the history of British television, Dennis Potter's Pennies from Heaven stars Bob Hoskins as Arthur Parker, a down-on-his-luck sheet music salesman in 1930s England. Beaten down by his frigid wife (Gemma Craven) and the economic depression gripping the country, Parker escapes into a world of song and, along the way, meets his true love (Cheryl Campbell).