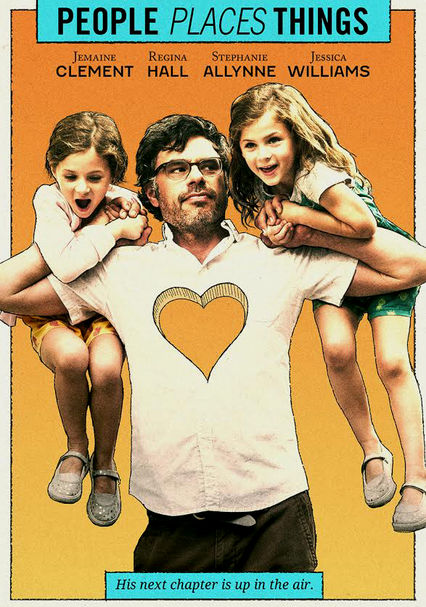 2015 R 1h 26m DVD
When graphic novelist Will Henry discovers his wife's infidelity, it sends him into exile from his family. Living in a tiny apartment, Will is too depressed to write and can't let go of his ex -- until a student challenges him to move forward.

Parents need to know that People Places Things is a quiet, thoughtful romantic drama about a man (played by Flight of the Conchords' Jemaine Clement) who's slowly, finally, coming to terms with his life a year after being dumped by his wife. It's an honest look at grief and sadness, and it shows how tough it can be to move forward when your life is upended -- but also why it's so important to do so. There's some strong language (including "f--k" and "s--t") and sexual references/moments (including an early scene featuring a topless woman and another in which it's implied a couple has just had sex), as well as several mature discussions about the nature of relationships that make it best for older teens and up.

A few scenes include sexual content/references to sex, including one with a topless woman and another that shows a couple who seems to have just finished having sex. Some kisses.

Two men scuffle in a brief dispute that culminates with one punching the other.

Sometimes you have to let go, even if it's hard, and even if you're letting go of someone you still care deeply about. Trying to hold on to things -- like a failed relationship -- can keep you stuck in place, while letting go can free you to move forward. Heavier themes include dealing with grief and sadness.

People drink wine with a meal during an awkward date.