People Who Die Mysteriously in Their Sleep 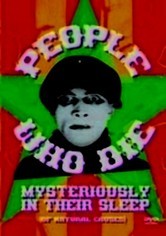 People Who Die Mysteriously in Their Sleep

2004 R 1h 30m DVD
Producers of this unusual film have created a new genre: what will forever be known as the "sampling movie," where filmmakers piece together footage from other big-screen features to create a new one. In this case, a secret society's leader known simply as the Grand Poobah has died, so a scramble ensues to quickly find a successor. Everyone from a circus monkey to a former disco king wants the title, so it's a wild ride until election day.