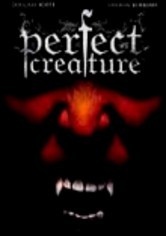 2006 R 1h 28m DVD
A rebellious vampire named Edgar (Leo Gregory) begins feasting on flu victims in this sci-fi horror film set in an alternate world where vampires live peacefully among people. But the Church has sent Silus (Dougray Scott) to capture Edgar and uncover his chilling secrets. Saffron Burrows co-stars as the police chief who helps Silus hunt down the bloodsucker in Nuovo Zelandia, an alternate dimension of 1960s New Zealand.