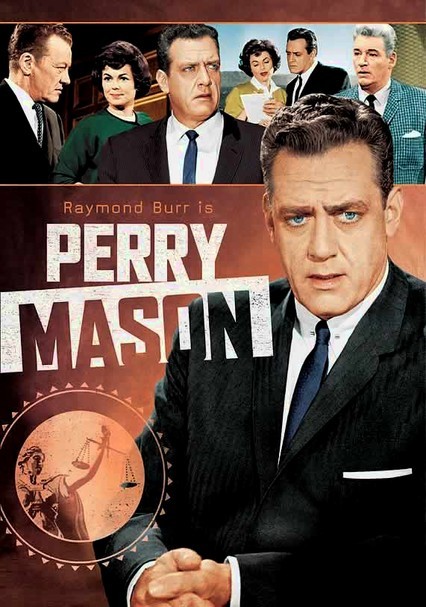 1957 TV-PG 3 seasons
One of the most popular television legal dramas of all time, Perry Mason stars velvet-voiced Raymond Burr as a talented lawyer who sets out exonerate the wrongfully accused as he faces off against glowering prosecutor Hamilton Burger.

Intrepid defense attorney Perry Mason (Raymond Burr), who offers the most riveting and eloquent closing arguments ever heard in a Los Angeles courtroom, tackles 15 more complex cases with his wise secretary Della Street (Barbara Hale) and energetic investigator Paul Drake (William Hopper). Perry seeks to help a rebellious heiress, find the parents of an abandoned baby and unmask the killer of an actor slain while performing in "Romeo and Juliet."

Crack defense attorney Perry Mason proves master of the courtroom once again in this intriguing volume of head-scratching cases that begins with a missing book -- and ends in cold-blooded murder.

Television's sharpest legal defender takes on more tough cases in the second half of the Emmy Award-winning show's sixth season. The docket includes international intrigue, a tell-all book, a murdered dance instructor and a man back from the dead.

Parents need to know that this classic courtroom drama deals with murder in almost every episode. While bodies generally aren't seen, there are images of bloody murder weapons (though in black and white, the blood is hard to discern) and detailed discussions of the less-gory elements of the crime. Some scenes -- such as a woman being chased by a man who's trying to sexually assault her -- can be mildly alarming. The now-classic chalk or tape body outline at the crime scene is a common sight. The show was made in the '50s and '60s, so there's some casual smoking and gentle reinforcement of some old-fashioned gender and racial stereotypes.

Some embraces and mild kisses.

Every episode involves a murder and the investigation of the crime, but it's not very graphic -- particularly by today's primetime standards. Bloody murder weapons are sometimes shown, but generally not bodies. Other violence depends on the episode but can include attempted sexual assault, sexual harrassment, fistfights, and the occasional threat with a gun.

While all sorts of unsavory characters appear in each episode, Mason and his crew are honorable and ethical. Given the show's "vintage" nature, expect some fairly mild gender and racial stereotypes.

Some main characters smoke (not unexpectedly, given the '50s setting). Occasional drinking.