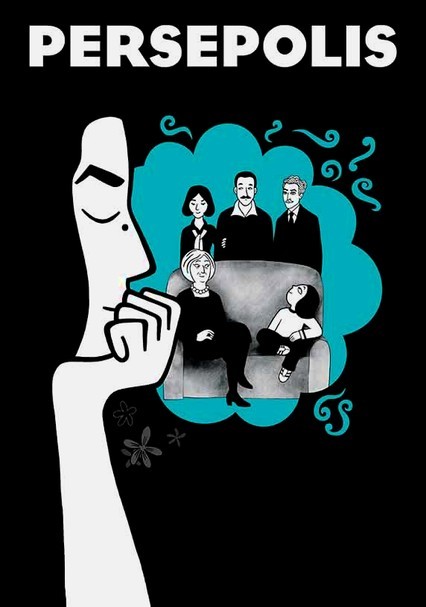 2007 PG-13 1h 35m Blu-ray / DVD
Based on Marjane Satrapi's autobiographical graphic novel, this Oscar nominee for Best Animated Feature Film follows a young woman's childhood in repressive Iran, her adolescence in France and her return to Tehran as an adult.

Parents need to know that although this film -- an adaptation of graphic novelist Marjane Satrapi's critically acclaimed memoir about growing up in Iran during the Islamic Revolution -- is animated, it's aimed at adults. There are many references to the atrocities (mostly executions and bombings) of life before, during, and after the revolution. Several scenes involve secret parties during which secular Iranians drink and smoke; as a teenager living in Europe, Marjane also drinks, smokes, tries hash, and sleeps with two guys (at one point, feeling suicidal, she also takes lots of pills). If teens are interested, they'll learn a lot about the harsh realities of life in an oppressive culture. It's worth noting that there are two versions of the film: The original is in French with subtitles; the other is dubbed in English.

Marjane kisses and hugs a couple of characters and catches a boyfriend in bed with another young woman. She admits that she's not virgin and tells her virgin friends back home that sex is good depending on the guy.

Several characters die, either by firing squad, public hanging, or falling while running from the police. Blood is depicted as black, oozing from a shadowy/black figure. Other scenes portray bombings, revolutionary battles, and dead victims. Marjane's mother reveals that since it's illegal to execute a virgin, unmarried female prisoners are forced to marry soldiers and have "their virginity taken" first.

Marjane tries to keep her grandmother's promise to be true to herself and to honor her roots despite all the changes going on around her.