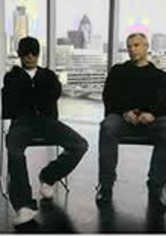 2006 NR 2h 26m DVD
Spanning the Pet Shop Boys' career from the early days to the release of the duo's 2006 album "Fundamental," this retrospective documentary features interviews with the band, their musical colleagues and celebrity fans. Interviewees such as Robbie Williams, Jake Shears and Bruce Weber share their thoughts about the English synth-pop twosome (Chris Lowe and Neil Tennant), who have topped the charts time and again since the 1980s.