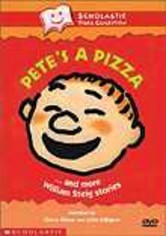 1976 NR 0h 54m DVD
The title story tells author William Steig's tale about a boy named Pete who imagines himself as an ingredient in a pizza. Also included is the Oscar-nominated "Doctor De Soto," about a dentist mouse who encounters a scary patient, and "The Amazing Bone," about a mysterious talking bone. Also featured are "The Three Robbers," "Moon Man" and "Great White Man Eating Shark." Actors John Lithgow and Chevy Chase narrate.