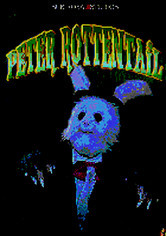 2004 NR 1h 20m DVD
Peter Rottentail (played by one of the movie's legendary directors, John Polonia) is no benign pet. A part-human, part-rabbit monstrosity produced by a magician at one horrific birthday party, Peter's lusty for blood. So, when a couple decides to rent the house in which the party took place, they're in for a murderous fight for their lives. Peter Rottentail has never recovered from that gruesome day, and he's out for revenge.