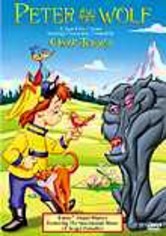 1996 NR 0h 48m DVD
Sergei Prokofiev provides the musical soundtrack for this thrilling animated adventure about a boy who outfoxes a wolf at his own game. Between the animated bits is a live-action tale about another Peter who discovers the power of imagination. A talented team of actors, including Kirstie Alley, Lloyd Bridges and Ross Malinger, give voice to characters created by Chuck Jones in this 1996 Emmy Award winner.