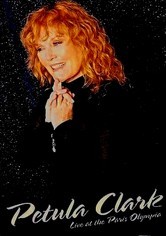 2004 NR 1h 30m DVD
Petula Clark blazed a trail in the 1960s with such hits as "Downtown" and "Don't Sleep in the Subway," but this concert, filmed at the Paris Olympia in September 2003, proves why she's lasted through the decades. See how her sound has evolved through the years and how her talent crosses language barriers (she sings in both English and French) while never losing that unmistakable Petula Clark quality for which she first became famous.