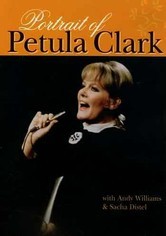 2008 NR 1h 5m DVD
Filmed in London, Paris, New York, Geneva and Los Angeles, this concert compilation catches iconic British songbird Petula Clark at the height of her powers and showcases to great effect her enormous voice and talent. Joined by special guests Andy Williams and Sacha Distel on several numbers, Clark sings some of her best-known songs, including "Downtown," "I Know a Place," "Mademoiselle de Paris" and the timeless "My Funny Valentine."