Phil Lesh and Friends: Live at the Warfield 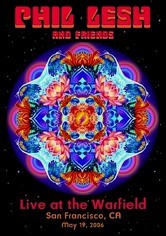 Phil Lesh and Friends: Live at the Warfield

2006 NR 2h 30m DVD
Bassist Phil Lesh and his band of "friends" -- Joan Osborne, John Scofield, Larry Campbell, Rob Barraco, John Molo and Greg Osby -- settle in for a two-day musical event at San Francisco's Warfield Theater. The selection of tunes includes "All Along the Watchtower," "Uncle John's Band," "Eyes of the World," "The Eleven" and "Slipknot," along with a candid discussion among Lesh, Scofield and Osby about the art of improvisation.