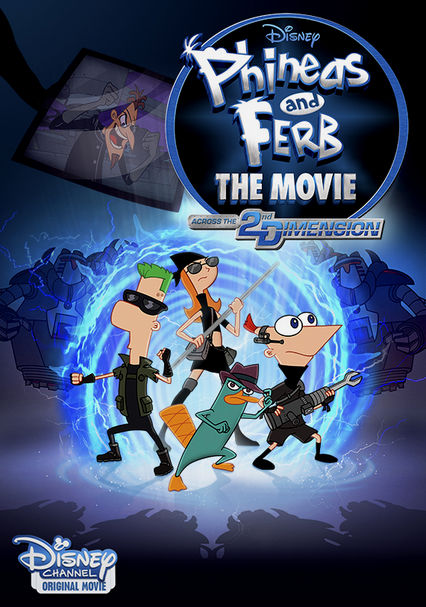 2011 TV-G 1h 18m DVD
After following Dr. Doofenshmirtz into an alternate universe via his Otherdimensionator, Phineas and Ferb make a surprising discovery about their pet platypus, Perry: He's been working as a secret agent.

Parents need to know that this TV movie add-on to Phineas and Ferb comes with a sizable marketing effort that includes video games, clothing, accessories, and a soundtrack with music from the movie as well as the series (seven catchy, full-length songs are featured in the 90-minute movie, which sometimes gives it the feel of a string of video ads for the songs). As for content, none of the characters' outlandish adventures will come as a surprise to the show's many fans, and there are positive messages about friendship, loyalty, teamwork, and trustt. Classic TV and movie references and witty dialogue will keep parents' interest while kids revel in the outrageous adventures. While most ages will find a lot to like here, the action and cartoon violence (laser blasts, electrocution, and a robot invasion) might be too much for very young kids.

A girl gives a boy a quick peck on the cheek, and a teen frets over the possibility of her crush losing interest in her when he goes to college. There's mention of a boy being "cute" and "dreamy."

The movie's animation style takes the edge off of the action sequences, but there is some violence, like laser blasts that decapitate robots' heads, death-defying falls, fistfights, and electrocution. Robots trample cars and threaten people's lives, so suspense and peril are issues as well. In one scene, the villain aims to feed the heroes to a ferocious monster.

One instance of "idiot," and a song's lyrics include the phrase "let's go kick some robot chassis."

The movie is all about fun, and there's hardly any reality to the characters' over-the-top adventures. There are some positive themes in the characters' loyalty to each other and the kids' determination to stand up for what's right, and teamwork is an essential factor in their success.

The movie is part of the popular series Phineas and Ferb, and it boasts a huge marketing line of video games, accessories, and a soundtrack that includes the movie's seven original songs, as well as a number of selections from the show.