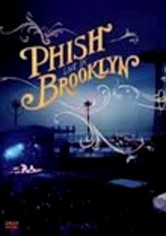 2004 NR 2 discs
Improv rockers Phish garnered a large following with their unique method of blending numerous musical styles, including rock, jazz, bluegrass, heavy metal, folk and classical. Filmed at Coney Island in 2004 and simultaneously broadcast to movie theaters nationwide, this concert marked the start of the final Phish tour. Songs include "A Song I Heard the Ocean Sing," "Dinner and a Movie," "I Am Hydrogen," "Sample in a Jar," "Moma Dance" and more.