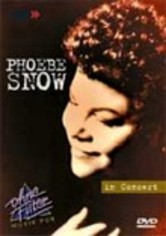 2002 NR 1h 0m DVD
Born and raised in the Caribbean, Phoebe Snow's vocal talents gained her acclaim throughout the pop world. Blending folk, pop, jazz and soul, the singer became an international pop star. In Concert was filmed in Baden-Baden, Germany in May 1989. In her performance, Snow beautifully sings 10 songs, including "Poetry Man," "Let the Good Times Roll," "I'm Your Girl," "Cardiac Arrest" and "Thankful and Thoughtful."