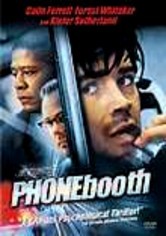 2003 R 1h 21m DVD
In this intense drama, which takes place in and around a single phone booth in New York City, slick New York publicist Stuart Shepard (Colin Farrell) picks up a ringing receiver in a phone booth and is told that if he hangs up, he'll be killed. Turns out Shephard is being watched by a rooftop killer with a sniper rifle -- and the little red light from an infrared rifle sight is proof that the caller isn't kidding. Forest Whitaker co-stars.