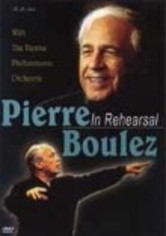 1998 NR 0h 57m DVD
Witness a behind-the-scenes rehearsal session with the Vienna Philharmonic Orchestra, led by French conductor Pierre Boulez, who is regarded as one of the foremost contemporary classical composers of the 20th century. Boulez and the orchestra rehearse his own composition "Notations I-IV" as well as Alban Berg's "Three Pieces for Orchestra," op. 6. The program also includes interviews with Boulez that explore his approach to Berg's work.