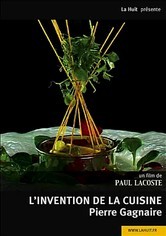 2008 NR 0h 52m DVD
Acclaimed French chef Pierre Gagnaire shares his fluid, ever-changing approach to cuisine in this delectable documentary. Working in the kitchen of his restaurant on Rue Balzac in Paris, Gagnaire doesn't prepare meals so much as he conjures them. His menus change monthly and his dishes vary from day to day. The film is part of a series of in-depth interviews with the world's greatest culinary artists