Pimp: Even Players Must Praise Him 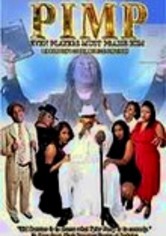 Pimp: Even Players Must Praise Him

2006 NR 1h 26m DVD
Keith Pringle, Sid Burston, Rodney King and Rodney Perry star in this film version of the musical stage production about superpimp Darke Gable and his run-ins with two powerful forces invading his turf: the mob and God. When a neighborhood church sets out to rid the community of prostitution and a syndicate kingpin puts a $10 million bounty on Gable's head, he finally begins to see the light and seeks redemption.