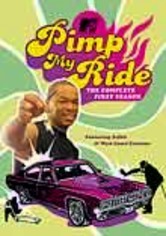 2004 NR 3 discs
MTV's wildly popular, half-hour-long, reality-based series is a Cinderella story as told through vehicles. In this first year, watch host Xzibit and his creative posse at West Coast Customs transform wrecks, beaters and jalopies into "pimped out" cars and trucks worthy of being crowned kings and queens of the road. At the end of each episode, the crew unveils the finished product to full effect in the big reveal.

Parents need to know that despite its relatively mature content, this series targets kids and teens, many of whom aren't even old enough to get a driver's license. There are some definite role model issues here that you might want to discuss (the host actively makes fun of people's property). And there's also the issue of the expectations that the show raises -- implying that additions such as DVD players, high-end sound systems, flat screen TVs, speakers, 20-inch rims, and video game systems are necessary if you want a cool ride.

Bleeped-out words are obvious and copious.

Women are treated a bit as "other," since the custom car world is a man's world. There's a strong message that a good-looking car makes a person more valuable. Younger viewers will wonder what a pimp is, and those who know what it is get the message that it's a good thing.

It goes without saying that the West Coast Custom's and GAS (Galpin Auto Sports) shops are getting lots of publicity here. "Thank you, MTV, for pimping my ride," is also heard as a result of the improvements. The car brand names and often the stereos, speakers, flat screen TVs, and DVD players are mentioned and shown.