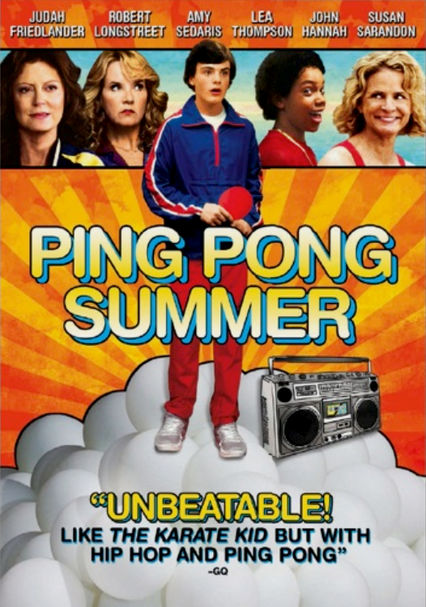 2014 NR 1h 32m Blu-ray / DVD
It's 1985, and 13-year-old Rad is a quirky kid obsessed with two things: ping-pong and hip-hop. But thanks to a life-changing summer vacation, he also fends off bullies, makes unexpected allies and develops his first real crush.

Parents need to know that Ping Pong Summer is an indie coming-of-age comedy set in the summer of 1985 in Ocean City, Maryland. A Sundance Film Festival flick, the movie is fine for most teens. Expect a smattering of language ("s--t," "a--hole") and references to drugs (kids gossip about a girl who may or may not put cocaine in her Slurpees), as well as some scenes of bullying/insults/pushing and shoving. The movie will remind young viewers that if they want something, they need to practice and focus and not let others bully them into self-pity.

The town bullies threaten Rad and Teddy, shove them, insult them, and pour milk over Rad's face.

Rad learns the importance of perseverance and discipline and not letting someone else's perception of you determine how you act or what you do.

It's rumored and then it looks like one girl puts cocaine in her Slurpees/suicide drinks, but later she reveals that she was just putting Pixy Stix sugar in it.