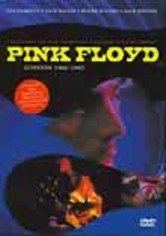 2005 NR 1h 0m DVD
At this juncture of their career, iconic band Pink Floyd had nearly perfected their sound, as evidenced by their performances seen here at London's Sound Techniques Studio, laying down tracks for Peter Whitehead's movie Tonite Let's All Make Love in London. Next is a trip to the "14 Hour Technicolor Dream Extravaganza" gig, with a glimpse of John Lennon and Yoko Ono. Also included are interviews with Mick Jagger, Michael Caine and David Hockney.