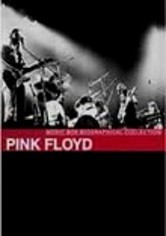 2005 NR 0h 37m DVD
From their formation in 1965 to the mainstream success of their 1979 album "The Wall," this revealing biography chronicles the career of progressive British rockers Pink Floyd. Through photos, film footage and interviews, the documentary traces the group's ups and downs, from the addition of guitarist Dave Gilmour to the surreal sound and lyrics of "Dark Side of the Moon" to the band's breakup and legal issues in the 1980s.