Pink Floyd: On the Rock Trail 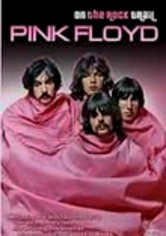 Pink Floyd: On the Rock Trail

2006 NR 0h 55m DVD
Progressive British rock act Pink Floyd is the subject of this installment of the On the Rock Trail series, which tracks the peaks and valleys of the band's unprecedented and influential music career. Starting out in the 1960s with a psychedelic edge that was anything but mainstream, Pink Floyd went on to release a string of successful concept albums, including the classics "Dark Side of the Moon," "Wish You Were Here" and "The Wall."