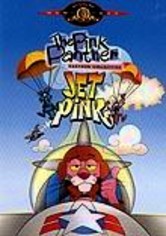 1997 NR 0h 51m DVD
The groovy pink cat's popularity lives on in this collection of short films featuring "Jet Pink," as well as seven other animated adventures. The Pink Panther has starred in dozens of animated short films since making his screen debut in 1964. The colorful feline character was created and developed by legendary animator Friz Freleng and producer David H. DePatie for the opening credits of the Peter Sellers comedy of the same name.