Pippi Goes on Board 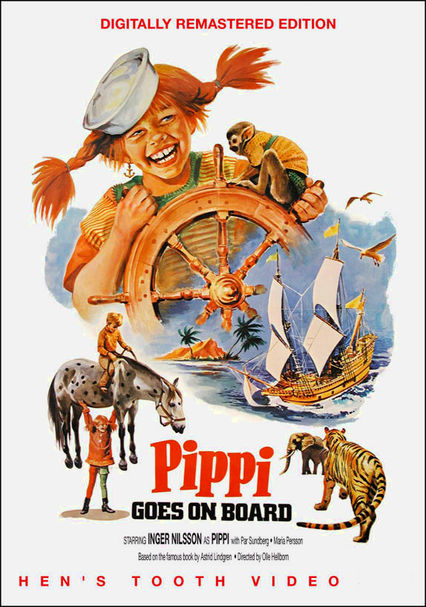 Pippi Goes on Board

1975 G 1h 19m DVD
The last entry in the Pippi Longstocking series finds Pippi (Inger Nilsson) preparing to reunite with her seafaring father (Beppe Wolgers), who's been living as the king of a magical South Seas isle. But before bidding adieu to Tommy (Pär Sundberg) and Annika (Maria Persson), Pippi has a few last wishes. She throws an offbeat birthday bash, causes bedlam at a carnival, creates the world's biggest snowball and hosts an unconventional Christmas.

Parents need to know that this is the last in the 1970s Pippi Longstocking series made in Sweden and based on the stories by Astrid Lindgren. There are no pirate adventures in this one so violence is much milder, though Pippi still shoots a gun in the air and takes on a carnival strongman. She also says anything's possible (she's a girl full of peppy confidence at all times) and proceeds to fly off a cliff without much of a problem; luckily her less magical friends don't give it a try. A few adults smoke and there are references to drunkenness.

A woman with a bare midriff writhes around a stage with snakes.

Dim-witted police see Pippi's red paint footprints and think there's been a murder. Pippi scares her friends into thinking there are ghosts in the attic who bowl with their heads. Pippi fires a gun in the air and pushes some men down and crushes more men with a giant snowball. Pippi also briefly lifts her head to the heavens and talks to her deceased mother. Pippi gets close to a poisonous snake and thinks nothing of it. She also decides she can fly and jumps off a cliff, landing neatly enough but saying that flying is harder than it looks.

One "stupid" from the bad guys.

Believing in yourself is big in this series -- Pippi always says that nothing is impossible. And in one creative game the kids play Pippi urges them to look more closely at the world around them -- they can discover the craziest things.

Three men smoke in different scenes both cigars and a pipe. Pippi gives her friends fake pills that she says will help them stay young forever. Rum is mentioned in a song and Pippi laughs at two policemen when they stagger around dizzy from a carnival ride, calling them drunk.