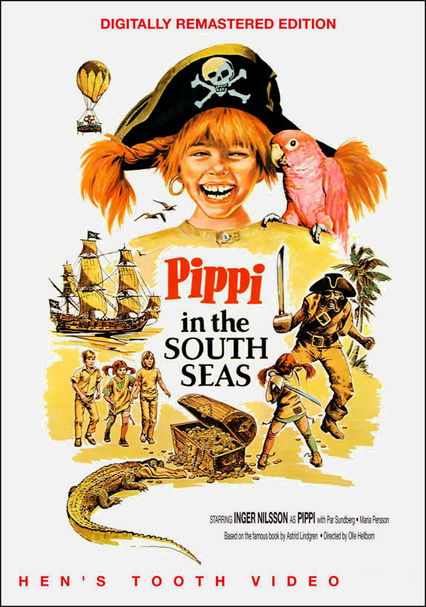 1970 G 1h 36m DVD
In this second installment of the Pippi Longstocking series based on Astrid Lindgren's books, Pippi (Inger Nilsson) gets word (courtesy of a message washed ashore in a bottle) that South Seas pirates have captured her seafaring father (Beppe Wolgers). With her best friends, Tommy (Pär Sundberg) and Annika (Maria Persson) -- and her pesky pet monkey, Mr. Nilsson -- in tow, Pippi hops a hot-air balloon and sets off on a daring rescue.

Parents need to know that this adorable yet very '70s kitschy Pippi Longstocking movie is a pirate adventure so expect plenty of cannon fire, sword fights, and high seas pirate antics. Pippi's father is held captive and she takes on a whole island of pirates, often fighting them singlehandedly then dancing a jig singing "I am Pippi Longstocking." She swims through sharks saying "who's afraid of sharks?" It's this optimism at every turn that keeps some of the more dangerous moments from being frightening. There's one tavern scene (with plenty of pirate drinking shown) where she effortlessly tosses two pirates out a window and hangs the bartender on the wall. Of course she does, it's Pippi.

Tomnmy says to Annika about a tavern boy, "I think you love Marco." Pippi gives Marco a quick kiss. Annika takes off her shirt to wash it (she's about 10 years old).

Pirates are at the center of the tale so there's lots of cannon fire, sword fighting (Pippi takes on the big pirates effortlessly), and some gunfire; Pippi brings a gun on the journey. Pippi's dad is held hostage. At one point two guns are pointed at his head and he's threatened with a knife. A boy is kicked in a tavern and Pippi throws the culprits out the windows and hangs the bartender on the wall. Pippi and friends are stranded on an island crawling with dangerous animals: lions, snakes, crocodiles. Pippi flies a plane through an active volcano with flames shooting everywhere. She also swims through sharks saying "who's afraid of sharks?" Pippi uses explosives to blast her father out of a dungeon. And one scene of tickle torture...

Something that sounds like "crap," but there's an accent. Pippi's dad is called all kinds of mostly silly names related to his weight like "overfed sea cow" and "chubby tub of butter."

Believing in yourself and being brave to save loved ones are big themes here. There are dangerous adventures and there's always a strong sense of optimism that everything will always turn out well -- with singing and dancing to follow.

The kids say of pirates that they just "drink and drink" and see them in a bar doing just that and dancing wildly; a young boy serves them drinks. Pippi's father drinks wine on the pirate ship.