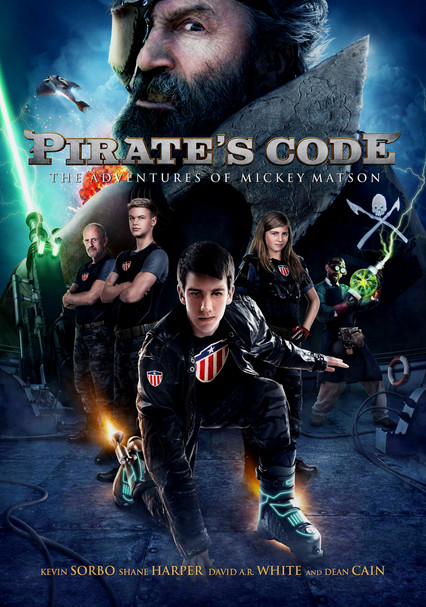 2014 NR 1h 31m DVD
Heroes Mickey and his best friend, Sully, are forced to take on a mission to save our country from the evil plans of Admiral Ironsides. The Admiral and his motley crew of modern day pirates have taken control of a large merchant ship with plans of deploying a new type of weapon that could destroy every electronic device on Earth. If Ironsides succeeds, it could be the end of the world as we know it.

Parents need to know that Pirate's Code: The Adventures of Mickey Matson is the sequel to the adventure mystery The Adventures of Mickey Matson and the Copperhead Treasure. There's frequent violence with lots of kicking and punching, along with a liberal use of electromagnetic shocks and ray guns. A creepy pirate with a missing eye and a harpoon hand takes a group of adults and kids hostage and threatens to kill both Mickey Matson and his grandfather. Details about the tragic death of a character's family are shared. There are some stereotypes, with Southerners portrayed as bumbling and dumb, and a few mild insults such as "weirdo" and "moron." Still, parents may appreciate the positive message about teamwork and the portrayal of girls, who are shown to be smart and strong.

Mickey and Sully shown in bathing suits, Mickey with a bare chest and Sully in a modest two-piece.

Pirates take kids and adults hostage and zap anyone who gets in their way with ray guns. Lots of punching and kicking with people getting hit in the head and knocked unconscious. A character reveals details about the tragic death of his family. The hole from a character's missing eye is shown, which is a little scary and gross.

Everyone succeeds when you focus on teamwork.

Characters drive a car that's prominently shown to be a Jeep Brute.