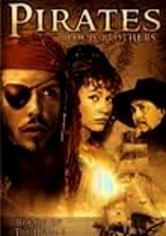 1999 R 3h 42m DVD
Two brothers act out a lifelong grudge on opposite sides of the law in this swashbuckling adventure. Born into a noble family, Ferrante (Nicholas Rogers) and Ippolito (Paolo Seganti) both love the same woman. When she's accidentally killed, the two can't forgive each other and part ways. Years later, Ferrante has become a notorious pirate. Meanwhile, Ippolito works for the government -- and he's been ordered to bring his brother to justice.