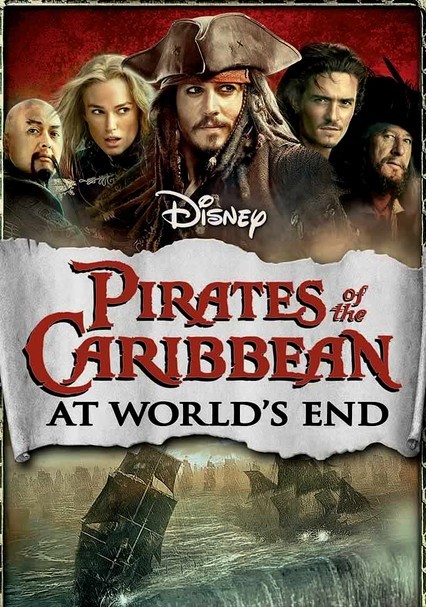 2007 PG-13 2h 49m Blu-ray / DVD
In the third installment of the swashbuckling series, the Dutch East India Trading Company has sworn to rid the seas of pirates, and Capt. Barbossa, Will Turner and Elizabeth Swann set sail for Davy Jones's locker to rescue Jack Sparrow.

Parents need to know that this installment of the Pirates franchise is packed with more death, action, and violence than most superhero flicks -- from the grim opening sequence in which Caribbean civilians (including a young boy) are led to the gallows to the climactic swashbuckling showdown. Since it's nearly three hours long, younger kids (or those with short attention spans) may not go the distance. And with so many double crosses and betrayals, the plot may even be confusing for adults. That said, thanks to Disney's ubiquitous merchandising and advertising campaigns, even 5-year-olds know who Captain Jack Sparrow is, so chances are your youngest kids will want to see it. But if they do, be prepared for them to wake up with nightmares.

Characters are hanged -- including a young boy -- and their dead bodies are shown in a pile. Lots of pirates, British soldiers, and unlucky seamen are stabbed and blown up -- especially in the final hour. Younger children may be disturbed by the opening gallows sequence and by seeing major characters die.

Elizabeth and Tia Dalma are strong, fearless female characters, and the cast of this movie is much more diverse than the previous two. Despite several betrayals, Jack and Will sacrifice what they want most and act selflessly for the greater good. Jack often acts as though he has no morals or ethics, but he's true to a strange code of his own.

Nothing in the movie itself, but the entire thing is a giant marketing machine for Disney.

Pirates love their rum, and once again it flows freely.