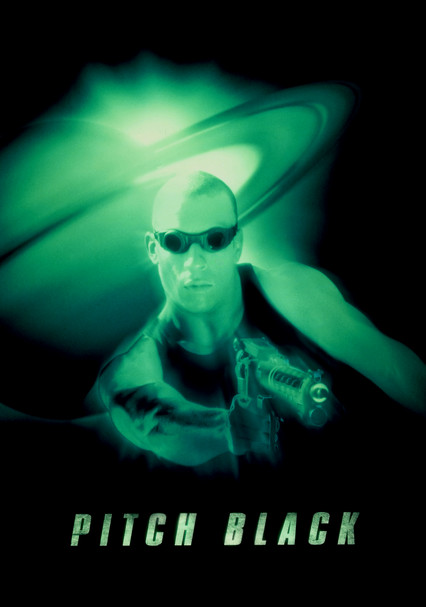 2000 UR 1h 52m Blu-ray / DVD
After crash-landing on a desolate planet, a pilot and her passengers, one of whom is a convicted killer, must find a way to survive in a hostile environment while fending off a race of carnivorous aliens that has begun to stalk them.

Parents need to know that Pitch Black is the sci-fi action movie that spawned Vin Diesel's "Riddick" franchise. This first movie, however, is mostly about characters working together to survive a greater threat. It features strong sci-fi violence, with creature attacks, blood splatters, shooting, fighting, and death. Language is also very strong, with many uses of "f--k," "s--t," and "a--hole." One character keeps a stash of fancy liquor, another smokes cigars, and a third is addicted to painkillers. Sex isn't much of an issue, though two of the female characters are dressed in skimpy/sexy outfits. Overall, older teens should be OK, especially given the movie's admirable themes.

The movie features very strong sci-fi violence, creature attacks, and gore. Several characters die, including main characters. There's a huge spaceship crash. We see splatters of blood. Characters are shot, stabbed, and slashed. Characters fight and argue with one another.

Teamwork rules the day in this movie. Whenever characters don't cooperate, or think mainly of themselves, they end up as beastie chow. Characters that work together, for the most part, manage to beat the odds. (There are exceptions, however, even to this rule.)

One of the characters is a liquor connoisseur. He has several bottles on hand that he's constantly sipping from and trying to protect (he ends up donating them as flammable illumination devices). Characters also smoke cigars, and one character is shown to be addicted to a painkiller, the result of a bad injury.