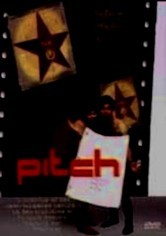 2001 NR 1h 21m DVD
Spencer Rice and Kenny Hotz, two floundering filmmakers and childhood friends, try to pitch their comedy script to Hollywood bigwigs who've gathered at the Toronto International Film Festival. They'll stop at nothing to get face time with Al Pacino, Matt Dillon and even film critic Roger Ebert. A rollicking farce, Pitch stands firmly in the tradition of Hollywood satires such as Robert Altman's The Player.