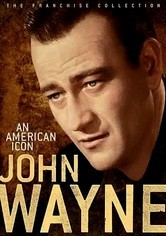 1942 NR 3h 23m DVD
John Wayne stars as a tough businessman and an even tougher warrior in this vintage double bill. In Pittsburgh, Wayne plays an ambitious coal miner determined to make to the top. Though he becomes a rich tycoon, his underhanded tactics drive away the woman he loves (Marlene Dietrich) and alienate his best friend (Randolph Scott). The sprawling epic The Conqueror features Wayne as Genghis Khan, the legendary Mongol who vanquished half the world.