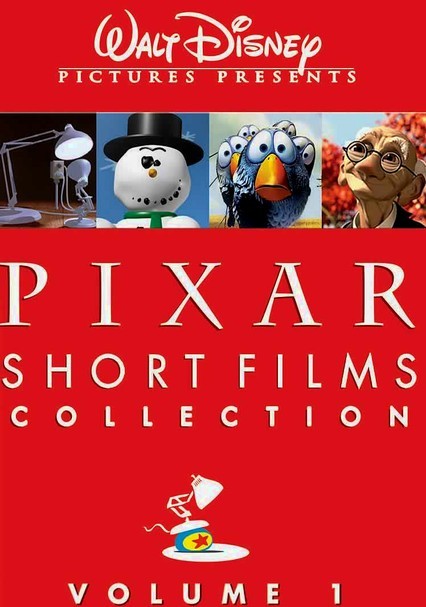 2007 NR 0h 54m Blu-ray / DVD
Enjoy some of the most inventive and entertaining animated short films ever made in this comprehensive Pixar Studios collection, with each wonderful tale featuring memorable characters -- from a mischievous bumblebee to an unwanted unicycle. Academy Award winners "Tin Toy," "Geri's Game" and "For the Birds" are included, as well as a special behind-the-scenes look at Pixar with founder and chief creative officer John Lasseter.

Parents need to know that this collection of 13 short animated movies is entirely wholesome, with just a few minor moments that might bother the most sensitive children. The elements of surprise, exaggeration, and slapstick are common in many of the shorts, so be prepared to see some mild cartoon violence. In "Mike's New Car," characters from Monsters Inc. have difficulty operating a car and the monster Mike gets smashed by the car's hood, bumped against its running motor, and altogether frustrated and upset by the experience. In "Geri's Game," an older man plays chess with himself and fakes a heart attack to distract his opponent -- a twist of logic that might escape, or even slightly disturb, younger children. In "Jack-Jack Attack" a babysitter has trouble with the baby from The Incredibles when he catches fire and shoots destructive laser beams. The humor in each of these films overwhelmingly overshadows any potential dark side.

In "Knick Knack" a snow-globe snowman is motivated to escape his glass home when he sees an attractive bikini-clad mermaid toy.

A mix of mild cartoon violence and surprises. In "Geri's Game" an old man pretends to have heart attack. "For the Birds" features birds pecking on another bird's feet to force it to let go on a wire. In "Mike's New Car," a character slams his hand under the hood. In "Jack-Jack Attack" a super-powered baby bursts into flames and shoots lasers. In "Mater and the Ghostlight," the tow truck character gets scared in the dark because of spooky stories.

Most of the films don't have an overt message, but a couple reinforce the positives of friendship, joy, and empathy, and show the negatives of greed, teasing, and pressure.

The shorts that include characters from feature films might encourage kids to covet co-branded merchandise.