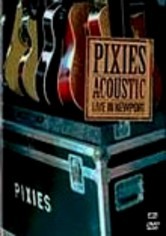 2005 NR 1h 41m DVD
The band that would inspire countless musical acts to come, alternative rockers the Pixies reunited for this unique unplugged performance recorded in 2005 at Rhode Island's legendary Newport Folk Festival. The set list includes classics such as "Bone Machine," "Monkey Gone to Heaven," "Gouge Away," "Hey," "Gigantic" and "Wave of Mutilation." Rehearsal footage captures the group transforming some of their songs from electric to acoustic versions.