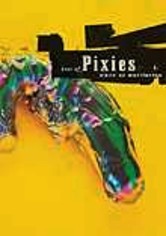 2004 NR 1h 0m DVD
Influential Boston-based alternative rockers the Pixies achieved stardom in Europe, but broke up just before breaking through stateside. This look at their legacy features a full-length concert and documentary shot during the band's late-'80s heyday. Also included is a retrospective documentary entitled "Gouge." An anthology of music videos rounds out the disc, including "Debaser," "Here Comes Your Man" and "Monkey Gone to Heaven."