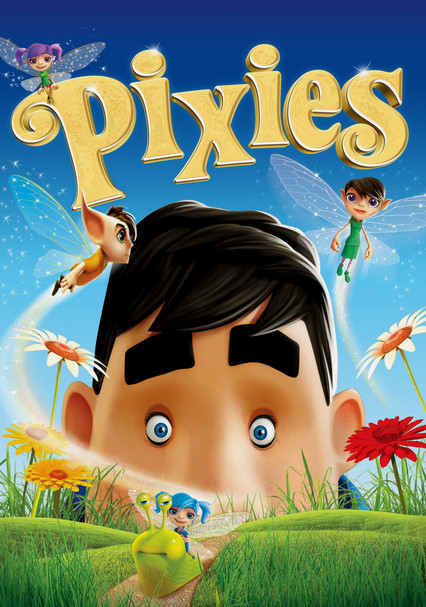 2015 PG 1h 18m DVD
Joe Beck has lost the love of his life thanks to a Pixie's Curse. He now needs to figure out how to get his girl back, learn more about the mysterious Pixies and undo a bad deed he did long ago.

Parents need to know that Pixies is a Canadian animated film based on a graphic novel and short film of the same name. Although the overarching message is that war and violence are never the answer, the message gets lost under the unrelenting slapstick violence inflicted on the humans by the pixies. Friends also treat each other badly, calling each other names and hitting and pushing each other when annoyed. There's some innuendo, hand-holding, and kissing -- and vegans and fans of yoga will no doubt be annoyed by the frequent mocking of their lifestyles.

A pixie is injured when a bag of garbage falls on him. Lots of pranks result in slapstick violence, such as getting hit in the head. A lot of talk of war and the need for vengeance. Friends regularly hit or push each other when annoyed.

Some insults such as "jerk."

Always take the high road and treat others how you want to be treated. End cycles of violence by being the one to forgive. Blind consumerism and technological advancement can lead to needless waste. Protect nature and the environment. Friends sometimes treat each other badly, meanly teasing each other and hitting and shoving each other when they're annoyed.

Anti-consumerist message that technology can create waste that's harmful to the environment.