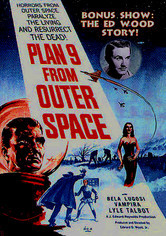 1958 NR 1h 18m DVD
After the embarrassing failure of the first eight plans, a group of evil aliens enacts plan nine -- resurrecting the dead to take over the Earth. Bela Lugosi makes his final film appearance -- along with Vampira, Tor Johnson, Criswell and a chiropractor acquaintance of director Ed Wood -- in one of the most popular cult classics of the 20th century, a two-time winner of the Golden Turkey Award for Worst Film and Worst Director of all time.